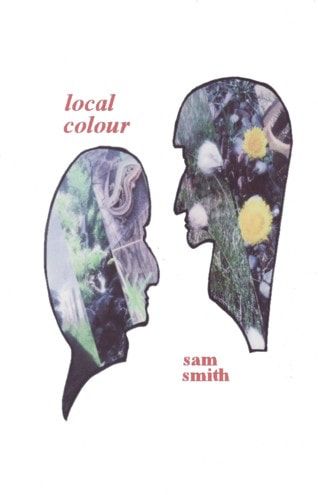 ​
​"This is some of the finest poetry I have read for some time, spare, sinewy and precise, each image created with deft touches of smell, sound or colour to draw the reader in. Smith uses each poem to sketch a character, or a scene, psychologically acute, often reaching into the person’s past to explain the painful dilemma of their present...."  Eve Kimber, Pulsar 2018 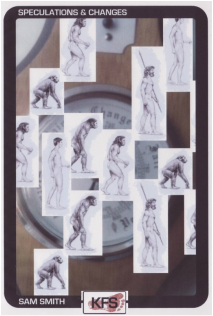 Changes began as Changes to Your Terms & Conditions, and changed…

'My favourite Sam Smith moments [in SPECULATIONS & CHANGES] are those when he is at his most withering: joyfully accosting other 'poets' and 'artists' for crimes of pretentiousness, vanity, facile accomplishments, false spontaneity, lack of hair (!) etc. No matter the insult, I always feel that Sam Smith's attacks are justified, as they are drawn from experiences that I recognize. The 'art world' he decries is the one we know and stomach, the one filled with creatures overflowing with pomposity and snobbery. It is a pleasure to see these poisonous creatures taken down a peg.' Charlie Baylis : Stride

"I found Sam's poems cumulatively effective. They capture, movingly and abundantly, both the exhilaration of close observation of the natural world, and the bleak sadness of the mentally ill. We find both, of course, in Clare's poetry too. Those who enjoy Clare's poems will find Sam Smith's collection fascinating, disturbing and rewarding."      Dr Peter Cox

"...These poems, which tell directly, honestly and with unsentimental compassion, of the daily lives of the patients and those whose task it is to care for them, are very powerful... This is an impressive collection of poetry, skilful, often quiet, sometimes shocking and well worth getting to grips with."      steve spence

"...Combining a persuasive polemic with lyrical prose poetry... Sam Smith puts forward an agenda that unites environmental issues with arguments about mental health... makes constant references to Clare and it is this thread which weaves together the strong fabric of his work so effectively...  This cornerstone also serves to draw together the various tones and textures of his work... the elegaic lament and the reportage storyteller...  adopts a language that is considered and a lyricism that is crafted... this work is a unique insight into the sad reality of mental illness... Smith's power lies in his simplicity and sincerity... a striking first collection which marries mellifluous sonority with grit and substance..." Annemarie Sparks

"...delivers a searing indictment on both the despoilation of the countryside and the decline in mental health services."  Debbie Rundle

"...the language is clear. He manages to demystify psychiatry, its processes and management, and invoke strong emotional responses. ...what strikes is the poet's genuine compassion for the plight of those stripped of dignity, of belonging..."  Poetry Quarterly Review 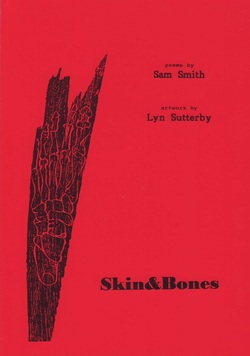 "...He is a distinctive and important poet, ever sensitive to, even obsessed by, the fluidity and transience of surfaces: impressed yet shocked by the dead weight and rigidity of solid centres. His poetry evokes a cosmos structured through those elements... Sam Smith is a keen and accurate observer of the particulars of nature... The engravings, themselves made on wood, which is one of the poet's prime integuments, are not mimetic of his imagery; but are embodiments in form and design of perceptions which seem to rise from the deep subconscious; whereas the poet's images are the impress on a heightened consciousness of a close observation and appreciation of nature's structural materials. Thus, there is a true complementarity between word and art..." K V Bailey: Zene #14

"Sam Smith is a poet who uses imagery, more than other poetic techniques, to good effect and uses it... to illuminate the harsh, livid beauty of places where humanity literally scratches the earth to live. Other poems are mental landscapes of equal harshness but they are not barren of emotion. The poems are well amplified by Lyn Sutterby's woodcuts reminiscent of Eskimo and other native carvings on slivers of whalebone and wood.... These poems are mirrors in which some readers will not like the reflected truth of what we really are by instinct... Sam Smith is a much more interesting social poet than many others in this respect..." Martin Holroyd: Poetry Monthly #20 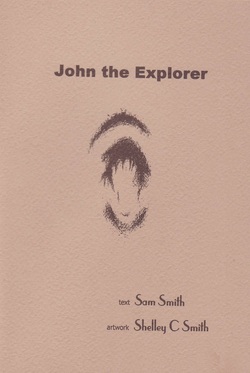 '...told in relentless, muscular language... Sam Smith has not written an easy book, but it's unusual and one that contains some fine writing.' Michael Bangerter: NHI

'...gathers together elements of a contemplation... the protagonist... goes on a series of meanderings... all 'making strange' the everyday. The writing is complimented by line drawings by Shelley C Smith which mirror the intriguing, often disturbing, text. Although the earthy is apparent here... it is presented with such graphic dexterity that because it is so intimate its crudity is readily forgivable... Smith presents ideas and images, symbols and lyrical tropes in ways which many other contemporary poets could benefit from considering.'  Niall McGrath: Poetry Quarterly Review      '

Don't be put off by past encounter with Berryman, Smith is much better with his single-name character. John has to explore, taste ivy berries once, face the elements, encounter animals, encounter encounters. John is a middle-aged baby that needs to find the world... Well illustrated by Shelley C Smith.'    Geoff Stevens: Purple Patch 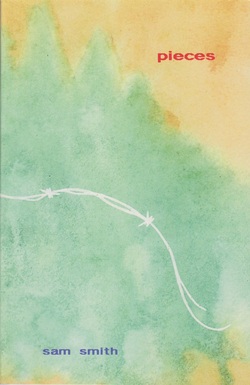 ‘ ...a captivating exploration of love, grief, and especially hope in a prisoner of war camp... But Pieces is also about violence, and therein lies something fascinating and even beautiful ... The lines are musical, lulling ... creates an enchanted, awful place where people are dying, where we don’t want them to stop dying, so we can keep reading...’ Donna Biffar: Orbis #121

' ...The descriptive density and personal revelation of the experience give these ‘pieces’ poetic weight .... Smith has a winning style...’ The Black Mountain Review #6

'...Smith's language has an abstract and untethered feel, but his descriptions of the natural cycle of life continuing beyond and without reference to the prisoners are compellingly precise...' L. Kiew NHI Online Review

' ...prose-poetry items which stand alone, or as a landscape of observations... This is a new approach; you need to read it yourself.' Geoff Stevens Purple Patch

And available as an e-book, the complete pieces, here - https://www.smashwords.com/books/view/1096975

apostrophe combe  (£7.99) Originally published by  boho/bluechrome press, who have now unfortunately gone into receivership. So far as I'm aware I have the final copy of the boho/bluecrome edition of 'apostrophe combe' for sale   - smithsssj@aol.com  text by Sam Smith with photos by Neil Carter & Gemma Dart

"...a most attractively produced book of poems and prose... interleaved with fine and original photographs by Gemma Dart and Neil Carter... text and the photographs together successfully "...create a sense of place and time", the place being North Devon, round Ilfracombe. Those who like Clare's poetry will find much to enjoy in this high quality work." Peter Cox: The John Clare Society Newsletter #83

recordings of poems from 'apostrophe combe' can be accessed via the 'Response to Landscape' website - http://www.audioscapes.org/

Problems & Polemics: Originally published by boho/bluechrome press, who unfortunately went into receivership. However Wordcatcher Press has decided to bring out a new deluxe edition 22nd December 2019.

"Voices echo throughout this collection, not only the voices of the schizophrenic, the bipolar, the possessed and the dispossessed but also the many voices of the poet which are often locked in contradiction and conflict. Contradictions that make Sam Smith's honest and humane observations, at times, almost too painful to read...  ...Don't throw away the key that Smith offers you in this brilliant and humbling anthology, for he offers you a key to an insight that few can offer us. If Shlovsky would have it that the work of the artist is to make the stone stonier then Smith asks you to consider the possibility that to label people as insane is perhaps the most insane thing that Society ever does. Few books, anthologies, poems leave you with the feeling that you have gained a privileged insight, Problems & Polemics however is one of those anthologies..." Alan Corkish: Neon Highway

"The big question hanging over this collection appears to be summarised in the poem 'What is Social, What Mental Illness?' and the lines are blurred with much manipulation and co-morbidity.... It's rare that I enjoy more than a third of any collection (and this goes for the "greats" as much as any other work) but I have to say that with this work, I was gripped from cover to cover, despite the uncomfortable subject matter and if you are going to invest ٥.99 in poetry this year, I would recommend that this book be the one that finds itself on your bookshelf as the price doesn't remotely reach the value of the text." Paula Brown: People's Poetry


"... brings together the threads of the psychiatric system, only to pull them apart again. Everyone is potentially vulnerable; everyone is potential victim or antagonist... These poems are full with disenchantment and irony concerning the paradox of care. And whilst Smith seems a polemicist he leaves us with no answers and no final judgement but for the evident fact that these systems are not working... I would highly recommend this compilation of poems to anyone who wants to unpick these problems as well as to those who appreciate proficiently crafted poetry." Jo Whittle: Mind Ground 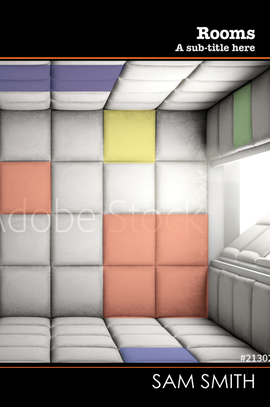 Rooms & Dialogues  was originally published by  boho/bluechrome press. Now Rooms is about to have its very own space between covers. And what excellent covers. Courtesy of Wordcatcher Press. Launch date is 27th February 2019.
£8.99
​

'...As they stand, the verse sections of the various rooms convey the coherent and rewarding variety of a very visual patchwork. However, the accompanying "notes for reading" have a dynamic and entirely different effect on the reader... a lot of the "notes for reading" are amusing, underlining writers' pomposity and loss of a sense of irony... As the "dialogues" develop, they embrace an enormous range of subjects, but the continuum is a philosophical one, where Smith, in a more liquid style, explores an extraordinary wealth of ideas, with no shortage of irony... Rooms & Dialogues is a remarkable achievement, where two bold conceits are explored in an assured, accessible and expansive manner. Each "room" asks its own question; each "dialogue" nurtures its own idea. Risks are taken and rewarded. The beauty of the book is its ability to make the reader think...'  Will Daunt: Envoi

'For me this book is by far the best thing that Sam Smith has done. In Rooms & Dialogues he seems to have found the perfect medium for his particular mix of caring humanism and bitter observation. The Rooms poems have a concrete presence while yet being enigmatic — they have a sense of absurd ritual. Perhaps the aim is more satirical than ironic but I have a hunch that this work has almost achieved an effect in excess of its author's intention — might be wrong. If there is a problem — and this is more evident in Dialogues — it is when Sam is too direct, then the tails of the poems become little more than opinion pieces, but mostly he avoids that through a sense of formal balance. The Bluechrome house-style suited this book too, not that important perhaps but it does help to foreground the feeling of the work. Another happy accident perhaps? ‘ Tim Allen: Terrible Work