First pages from Mock Sonnets and Other Lives 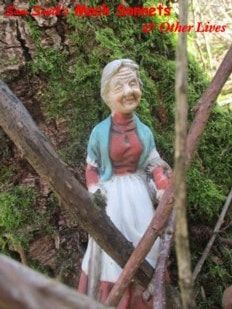 Mock Sonnets and Other Lives


Acknowledgements: some of these Mock Sonnets have been previously published in the periodicals Inclement, Moodswing, Osiris, Picaroon, The Poetry Village, A Taste of Foreign

Acknowledgements:- some of these Other Lives have been previously published in the periodicals  Dream Catcher, Friday Flash Fiction, Honest Ulsterman, Orbis, Riggwelter, Theory of Accidents, Tittynope Zine,

The leaves of war — oak, ash and sycamore --
have vascular tissues drawn a darker red.
Spiked leaf of holly’s cannot be seen; although
on its glossy curve is a gleam of smoke. Neither
can grass be defined singly; rather it is like hair
around a scalp wound, glued flat. On grey roads
the red diamond prints of tyres end in smudged
streaks. Ribbed prints of shoes do not reach
the inner edge of the canvas; or, inset, leather
uppers are photographed grey and are heaped
in sheds. Blood itself sits in rounded puddles,
blackening; or is smeared thin, yellowing.
The lactic acid in white milk — this is curious --
will also have it leave a black stain.

Forget the areca nuts. When Ceylon
was the only supplier of cinnamon,
grown then in Negombo and Galle,
the cinnamon cut from the shoots of the tree,
order Laurineae, its dusky pink bark
dried into tubes or quills, one Admiral
Sebald de Weert, in his cups, became
offensive to king Vimala Dharma Surya.
Said Admiral was subsequently killed.
(Small town malice and spite give
each other bad advice.) Cinnamic acid
is cystalline white and is used in perfumes.
While cinnamon camphora (guess what?)
gives us camphor. Forget the areca nuts.

While there may be a few paid but unprofessional lookalikes and squadrons of suburban imitators... “Highest form of flattery my arse,” Elizabeth II says in BHS where she is trying on hats with Jane Austen.
“Beret nice,” Jane says, theirs the inconsequential humour of women friends.
The queen decides not to be amused: “Sick to the back teeth of horsey scarves. Knotted under me chin. Feels like me face is being held together.”
She gurns at Jane.
When not making squeaky public speeches the queen adopts an earthy estuarine English.
“As for them cake hats,” she prods a blue-rosed pillbox, “looks as if I been bleedin’ iced.”
“As for meself,” Jane tries to moderate her semi-posh Bath burr, “and unlike my hysterical heroinnes, I can’t stand friggin’ bonnets. Give me a Davy Crockett any day.”
“Or night.”
“Once a night’s enough.” Jane cackles. The queen wheezes.
“’Ere,” she pouts into the mirror, “what d’you reckon on this helmet?”
“Now you’re being crude,” Jane says.

We are not yet autogamic: communication
continues to be a fundamental necessity,
but rarely achieved. The inarticulate, upon
failing, become the most apoplectic. Or, if
capable of some self-expression, they still
come up against those who cannot, or who
will not, understand. The frustration born
of this unaccustomed inability can lead to
extraordinary acts. “Let’s see what happens if,”
he will say. The woman, standing partially
behind, will pretend to hold her breath. He
will indecisively turn the radio off. The music
will continue in another room, another house.
Click on. Click off. The woman will pull a face.

You — hunkered down in the cave of your body --
look out through your mouth — at your old selves
grown whimsical and strange, at the leached
colours of your pasts (not at the bright dark present).
One half of a couple, clinging onto the other
in the wreckage of your mid-lives, every bridge
to the future is guarded and every movement suspect.
Reorganising this chaos, fiction can simplify;
but still you will carry your cocoon of personal space
about with you, your own contradictions too. You
also come more to exist externally in bits of paper
with your name on. For this self your one ambition
is to have your portrait in oils on the company walls.

Since his legs fell off Bhodhidharma has delivered his teachings from a supermarket trolley. He prefers to be far from the bustling fruit and veg section, further in where shoppers have slowed, become contemplative.

Hot days he haunts the freezer aisles, delivers mostly koans to those picking out frozen broccoli, “Behold the broken apothecary.” “Cry wine and sell vinegar!” he called out once in the beer and spirit aisle, got run-pushed into pet food. He was likewise sent half-spinning out of the nappy aisle when he was overheard to say, “The soft egotism of motherhood.” And from ‘international cuisine’ for a smiled epiphany: “Rice smells like mice.” No-one has yet objected to his singing along with the store radio in confectionery. Bhodhidharma loves those long end notes that hang out, he says, like a dog’s tongue. Neither thus far have any staff or customers raised concerns over his calling the sell-by bargain shelf, ‘a totality of thinghood.’

Left overnight in the see-through trolley shelter Bhodhidharma meditates on the arhythmic leaving of the one-by-one cars, lets his mind blank to the pooled lights, to the narrowing perspective of parking bay lines, photo-stillness of the misty night. Single thoughts will trickle in with the morning’s one-by-one arrival, the rank-by-rank amassing of similarly coloured cars.

You first sought significance to your existence
in the words and actions of others. But all were
flat-faced buddhas, blank of expression. So you
waited for the accidents of history to fall around
you. But you were, when not on the periphery,
more often elsewhere. And you wondered why
you were created with an ego the size of St Pauls
when you are so very very small, and with no luck
nor talent. Now where you are, just by you being
there, becomes commonplace. What you do, by
your doing it, becomes ordinary. Habits and gestures
of affection have outlived any love felt. An inner and
estranged observer, you now, with a glum satisfaction,
note the biological processes of life ending you.

Slavery, of itself, must always be evil. Castles,
misinterpreted as settings for romantic tales,
are symbols of oppression. Size alone says
that cathedrals and mosques must serve
a similar purpose. Although the insidious
concern of all religions is, not sex, but breeding.
‘....Shem begat Arphaxad, Arphaxad begat
Shelah, Shelah begat Eber....’ Thus of prime
importance is the self-disciplining family that
priest and mullah — with pained expressions
of self-denial — can govern. Puppets controlled by
puppets. And, in their bringing of order, there will
inevitably be those parents who will collude with
any authority in the brutalisation of their own child.

The girl child had come to believe that she was part of the soap opera and, even though it was a flat screen, she started to climb in. There were pauses, while she exchanged long meaningful looks with various of the soap’s characters. One, the soap’s muddled and easily shocked woman, lets loose a shriek at sight of the girl. But she and the girl gaze into one another’s eyes, then the girl continues to edge and wriggle herself further into the soap’s tidy rooms and gardens.

On coming into the living room all that the mother can see of her daughter is the soles of her patent leather shoes. Aware of her daughter’s other life fascination, “Please don’t do this!” she cries; and she takes hold of her daughter’s right foot. But, thinking to have heard a muffled response from the other side of the screen, the mother pauses in her tugging, listens.

She can make out nothing distinct, only earnest murmurings, possibly secretive, interspersed with lengthy silences – the looking - and punctuated by exclamations. While she has been distracted her daughter’s left foot has disappeared into the screen and she has less of the right to grip. The soap is eyeball to eyeball, nose to nose, almost to the cliffhanger and the credits. Her fingers are slipping. Oh no!

To be free of off-hand malice we follow the semi-
floating flight of a long-tailed magpie, occasional
whistle of a collar dove's wings, break step at sight
of bottle and dented cans tossed among pathside
nettles; which have us feeling pursued even here
by the same careless malevolence. So we make
ourselves look to the tree-top church of unseen
birds, listen to their vocabulary of tweets and
cheeps, note a bush-hidden robin trickling out
its watery song; and somewhere way above
the repetitive mewl of a circling buzzard
and the rumbling croak of a raven still seeking
the wished-for corpses of the vindictive and
neglectful who have brought us to this end.

Camp-site early, a chilled stillness, tent-folds
dew-heavy and loosely patterned with slug and
snail trails, grassblades releasing their gathered wet
around flip-flopped feet. Thin towel shouldered,
toilet bag in hand; whispered rustles and snores
are passed, a cough; and from the hill across the way
two loud bleats from a momentarily lost lamb.
Returning from the intimate echoes and splashes
of the washroom, now the gas hiss and caught
smell of the day's first kettles; and more campers
emerging pyjamaed and blinking, hair askew.
Under blue skies time now to consider what this
life, day-in day-out, must be like for the hundred
thousands of the world's war-fled refugees.